Western Kentucky’s coal production has picked up again, as we see mines employing new workers. In general, production is growing across the state, though it is decreasing in Eastern Kentucky.

According to the most recent Kentucky Quarterly Coal Report, which includes production from July through September, Kentucky generated 19.9 million tons during the three month period.

Across the world, millions of tons of metals — aluminum, copper, nickel and zinc — are being kept in secretive “shadow warehouses”, facilities that have gone unchecked and that don’t reveal their assets to the public. These warehouses function separately from the London Metal Exchange (LME), the long-established system for housing such metals.

Because producers and consumers don’t know how much metal actually exists on the market, it has become more and more challenging for experts to determine market pricing. If large quantities of metals surface onto the market from shadow warehouses, then it can become more costly to create everyday goods; conversely, mine and smelter production could be curbed if pricing falls beneath production expenses.

In November, LME set new guidelines that obligate LME warehouses to ship out more metal than they receive, for deliveries with 50+ day wait times. Many LME warehouses have been experiencing massive bottlenecks, which the new rules address. The rules will begin on April 1.

Shadow warehouses exhibit the dark side of capitalism, where metals are stored and hoarded for profit making, and where market supply and demand dynamics are being artificially controlled. 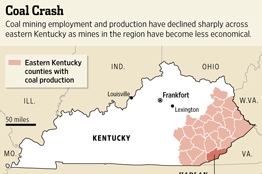 While the US’s stores of natural gas have been boosting the economy and lowering gas prices in unprecedented ways, the influx has also been hurting many Americans, especially those working in the Central Appalachian coalfields, primarily located in Kentucky, Virginia, West Virginia and Pennsylvania.

Over the past two years, dozens of Central Appalachian mines have closed, causing massive layoffs, which are likely to be permanent for the area. The coal industry is now concentrating on two other major coal basins in Wyoming and Illinois that are cheaper to mine.

Data from the Mine Safety and Health Administration shows that 26 Kentucky counties are the hardest hit by mine closings — counties that have been mining for over a century. Before 2011, the number of mining jobs in the region never dropped below 11,400; however, after 2011, the number of mining jobs has declined to 8,000, the fewest number of jobs since the 1920s. Almost 100 mines Kentucky’s eastern coalfields have shutdown since 2011, from 256 active mines to 161.

Many of the unemployed miners blame the layoffs on Obama and the EPA for introducing new regulations that will limit emissions for coal-burning power plants, what many Republicans have deemed the “war on coal.” However, the coal industry sees the layoffs as the sum of many things: new fracking technologies have further depressed the coal market, and Obama’s regulations have only worsened the situation.

Furthermore, many of the affected Appalachian coal mines’ production costs are higher (with a cheaper selling price), more abundant and more polluting than steam coal (used for power generation). Metallurgical coal, on the other hand, requires less production and a lower selling price needed for exportable global iron and steel production.